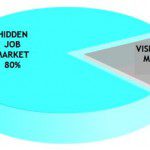 The “hidden job market” is one of the biggest of buzz phrases for job seekers. Many experts argue that up to 80 percent of the available jobs are hidden, although absolute documentation is hard to come by. So where are all these jobs, and how can you access them?

Typically, people think of the hidden job market as all the jobs which aren’t publicly viewable on a company’s website, job boards, or elsewhere. Some jobs will become public, but just aren’t there yet. Others are hidden and aren’t ever made public.

Before a job becomes public, several people are likely to know about it: the hiring manager; the manager’s boss who has to approve the addition to head count; members of the department who know that a job is being created or that someone has left or will vacate a position; an HR generalist who will work with the hiring manager to formulate the job description; HR staffing personnel charged with listing the position and recruiting for it—but haven’t yet made it public. When you put it all together, you can imagine 10, 20, or more people in different areas of a company knowing about a job to be filled before it becomes public.

There are several legitimate reasons why an employer may decide not to publish a position at all. Many employers simply don’t want to be deluged by large numbers of resumes they know that they would receive if they advertised the position. Often in a small or family-owned business the employer will approach his/her own network to see if someone knows anyone who is good at “whatever.” Sometimes a stealth search is undertaken for other business reasons, such as not tipping off the competition about what is going on, or even to replace an under-performing worker who is still on the job and doesn’t yet know of the employer’s intention to let him go. The list of reasons can go on and on.

You never know in advance who might be in that select group who has advance knowledge of a job opening, or be looking for someone without advertising it. But by getting out there, interacting with others in a whole range of activities, and more formal networking, you will increase your chances of finding that hidden opportunity.

The most important thing that a job hunter can do after creating a dynamic, achievement-based resume is to go about talking to as many people as possible. By engaging with other people in all aspects of your life, you can often make serendipity happen.

A classic example is an unemployed man who was cheering his son on in an inter-school soccer game. He struck up a conversation with the man standing next to him who, it turned out, was the father of one of the opposing team’s members. With a little small talk he found out that the man happened to own a company in the same field. In the course of conversation, they asked about each other’s employment. Within a larger context, the job hunter offered his well-honed personal branding statement and let it be known that he was pursuing new opportunities. The other man replied, “I’ve been thinking about hiring someone with just your background for my company. How about coming in on Monday morning so we can get to know each other better?” Two weeks later, the unemployed man started his new job.

Network and Seek Out Decision Makers

Research your target companies through business publications, search engines, and social media like LinkedIn. When you see someone’s achievements written up, send a note of congratulations. Ask if you can have a few minutes of his/her time to learn more about what they’re doing, their innovation, expansion, or business initiative. Make certain to convey that you are not asking for a job, and are interested to find out more about the other person.

When you are successful in networking, you can then demonstrate your knowledge of and interest in the field. In this context you can ask, “Who are the other key people you think I could learn more from?” Turn a bit of information into a personal encounter. Turn the encounter into an informational interview. And turn one informational interview into a series of others. As the process goes on, at a minimum you will learn a great deal, and over time you will likely meet someone who is looking for you but just didn’t know it. The hidden job will then become revealed, and you will be at the head of the line to be considered.

Arnie Fertig is the head coach of JOBHUNTERCOACH.COM, where he utilizes his extensive background in HR Staffing and as owner of a recruiting company to help mid-career job-hunters land their next job. Arnie provides one-to-one coaching services to individuals throughout the U.S. in all aspects of the job hunt, including: resume writing, personal branding, utilizing social media, enhancing networking skills, preparing for interviews, and negotiating compensation.